Erectile Dysfunction Statistics, Facts & Figures in the UK in 2021

Erectile Dysfunction is experienced by nearly half of men in the UK, with our recent study finding that over 16.5 million men in the UK in 2021 are affected by the condition. But which age group is affected the most? And just how often are drugs such as Viagra and Cialis prescribed to British adults? And what cost does this have to the NHS in England and Wales?

To find out, we conducted a survey asking 2,000 UK adults about both theirs and their sexual partners’ experiences with Erectile Dysfunction, as well as conducting an analysis of online searches and digging into NHS prescription data for common treatments for the condition.

Our research found that:

How many people in the UK have erectile dysfunction in 2021?

In November 2021 we conducted a survey of 2,000UK adults using the market research company Censuswide. Our survey asked participants the following question and provided them with a list of options to choose from:

How often, if ever, have either you or a sexual partner had difficulty getting or keeping an erection? 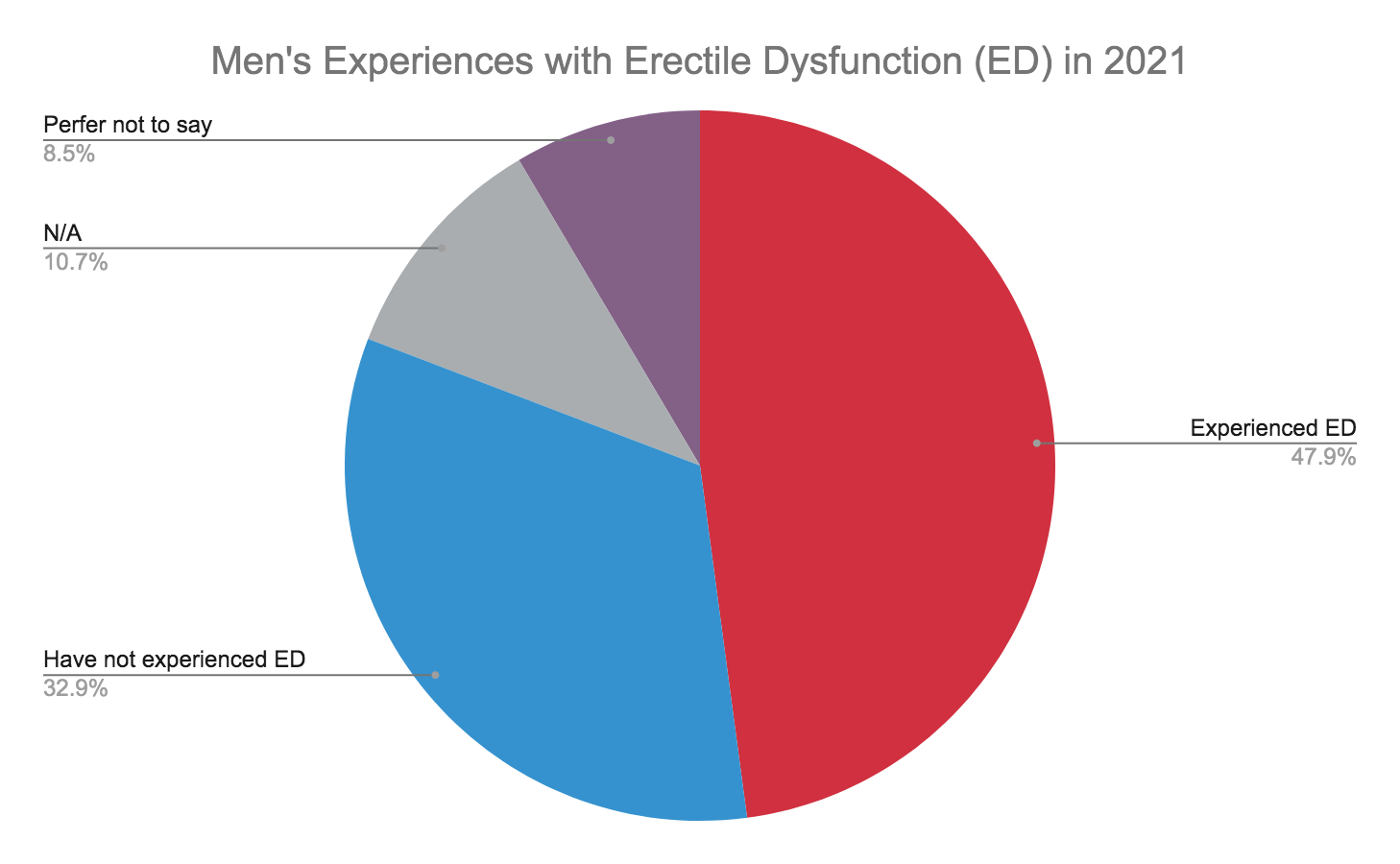 Which age groups are affected by Erectile Dysfunction the most?

Is Erectile Dysfunction most common amongst older people? Or can younger people also be affected by the condition? To find out, we analysed the results from our survey which asked 2,000 UK adults ‘How often, if ever, have either you or a sexual partner had difficulty getting or keeping an erection?’ 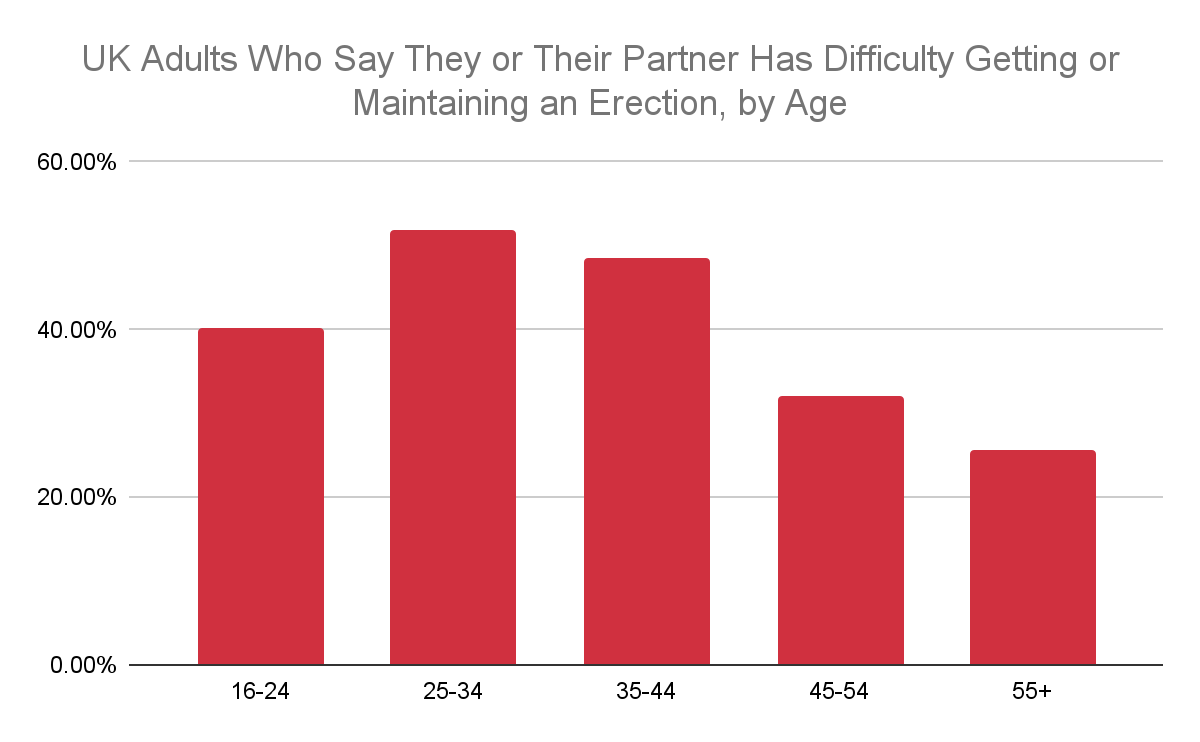 The percentage of people who answered ‘always’, ‘sometimes’ and ‘occasionally’ in each age group

As you can see from the chart:

It’s important to note that we surveyed both men and women, so many participants answered this question in relation to their sexual partners, who may not be the same age as them. However, since the average age gap between couples in the UK is between 3 and 5 years, the accuracy of the data is unlikely to be heavily swayed.

Which cities have the highest rates of people with Erectile Dysfunction?

It’s quite clear that Erectile Dysfunction is highly prevalent amongst a wide range of men, both young and old. But which parts of the UK tend to suffer most from the condition? Is it busy city centres where people may have higher stress levels? Or could it be in more rural areas?

To find out, we asked all of the 2,000 participants in our survey which major town or city they live closest to and then compared the results for each city. 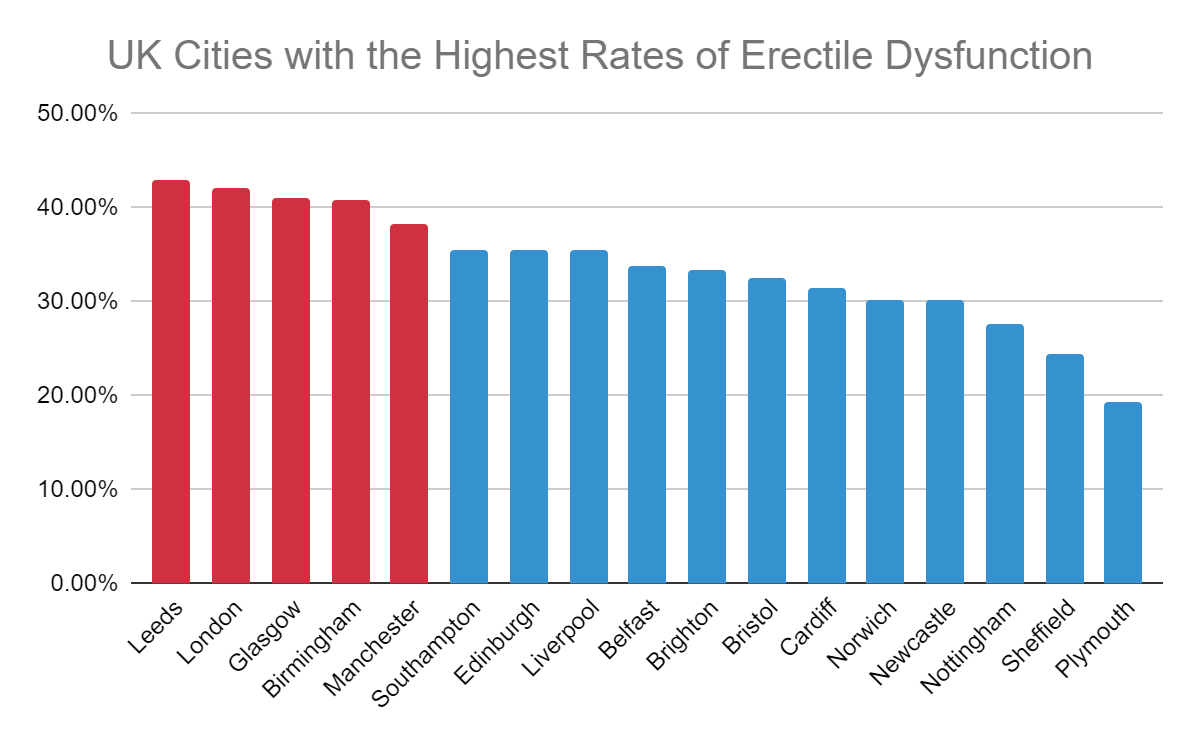 As you can see:

So it’s quite clear that Erectile Dysfunction is a condition that affects a wide range of people here in the UK, but just how many of us have used medication in order to help treat its symptoms?

To find out, we analysed NHS prescription data for England and Wales using the online resource, Open Prescribing. This enabled us to find that:

This was based on figures relating to the year ending September 2021 for prescriptions of Viagra, Sildenafil, Tadalafil, Cialis and Vaccum Pumps for Erectile Dysfunction.

Which cities are prescribed the most Erectile Dysfunction medication?

In 2021, the NHS prescribed more treatments for Erectile Dysfunction in Kent and Medway than any other CCG (clinical commissioning group) in England and Wales.

Over the last year, 10,772 items were prescribed for Erectile Dysfunction in Kent and Medway alone. That’s the equivalent of 29 items every single day.

The second highest prescribing area for Erectile Dysfunction treatments in England and Wales is North East London, where 10,499 prescriptions were made for ED medication and treatments in the last year.

Where are Erectile Dysfunction treatments most searched for online?

So now we know which areas across the country prescribe the highest quantities of medication and treatments for Erectile Dysfunction. But as we found in our survey, there are millions of many men across the UK who experience the condition, and not all of these men are in receipt of treatment from the NHS.

Our online search analysis found that searches for erectile dysfunction have been increasing year on year since the early 2000’s.

We also analysed online searches conducted during 2021 relating to Erectile Dysfunction treatments in order to determine how sought-after treatments for the ED are in the UK. These terms included:

Our analysis found that:

As you can see from the table above, towns and cities in the North of England appear to conduct the highest proportions of searches for Erectile Dysfunction treatments.

In fact, 7 out of 10 of the highest searching cities are either in the North East or North West of England.

*This is based on the assumption that each search is conducted by a different individual which may not always be true, as one person may conduct multiple searches for these terms.

To calculate which towns and cities in the UK search online for Erectile Dysfunction treatments the most, we gathered population data for the major towns and cities in England and Wales, Scotland and Ireland. To then determine the number of searches per 100 people in the population, we used the Keyword Finder tool to obtain the average number searches per month in each town and city for the terms mentioned above. We then added these together and multiplied this by 12, which gave us the total yearly search volumes for all of these terms. We then proceeded to divide this total by the population to calculate the number of searches per person, before multiplying by 100 to get the average number of yearly searches per 100 people in each town and city.

We hope these Erectile Dysfunction facts, figures and statistics have given you a good insight into the prevalence of this condition in the UK in 2021. If you, or someone you know is affected by this condition and would like to find out more about the treatments available, head over to our Erectile Dysfunction Treatment page where we explain the various options available.