STD Statistics - Facts and Figures For The UK in 2021

Sexually transmitted diseases (or STDs for short) such as chlamydia and herpes are some of the commonly known, but which STDs are most frequently diagnosed in the UK? And which cities are affected the most by diseases such as these?

To discover all of the most up-to-date statistics on STDs in 2021, we conducted an analysis of diagnoses made in the UK, online search data and existing research on the topic of STDs and STIs. We also assessed the impact of the COVID19 pandemic on the ways in which the UK has been affected by STDs over the last few years.

*This figure was calculated using the estimated number of those living with HIV in 2019 from the National AIDs Trust website and the current UK population from World Population Review.

What is an STD?

Many people, including doctors and other medical professionals, may use the term STI rather than STD because of stigma and bad connotations surrounding STDS, so the terms are largely treated as interchangeable.

What are the Most Common STDs in England?

According to official statistics from Public Health England, the most common STDs in England are:

To find out how the UK is affected by STDs, we used Public Health England’s data combined with that from the NHS websiteto find the most common STDs in the UK*. We then used the Keyword Finder tool to see how many people in the UK search for them online. 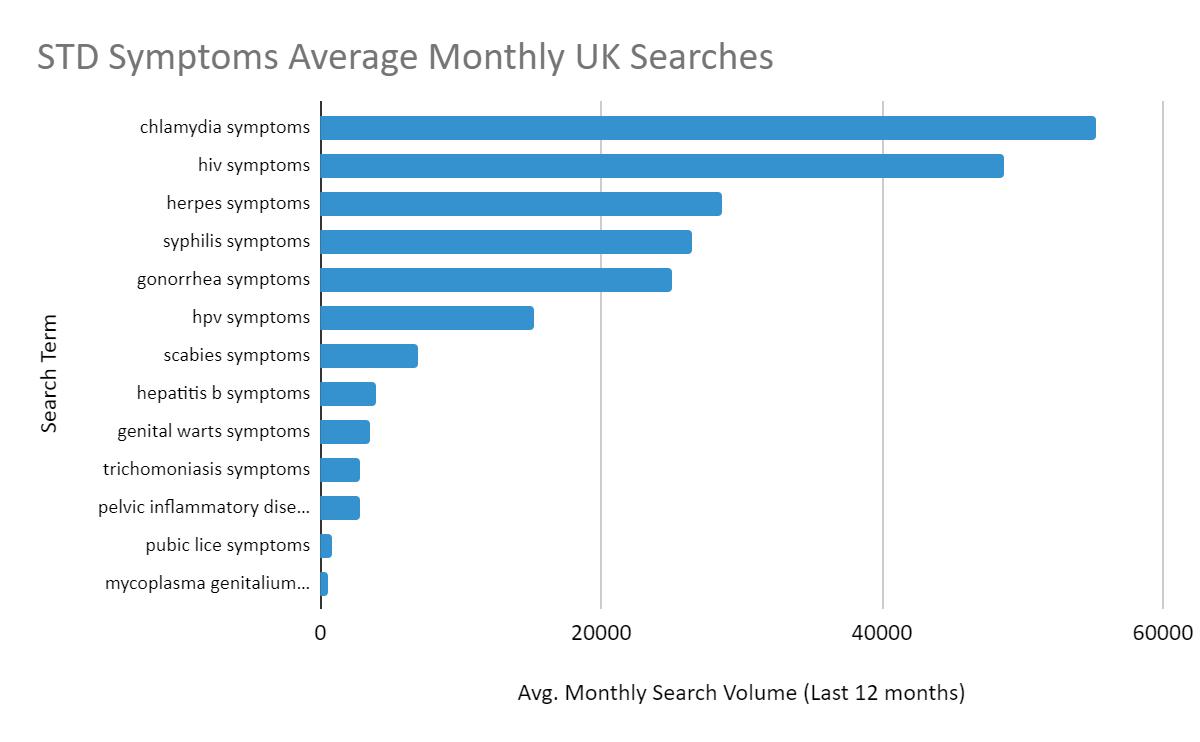 *The only condition researched which was not on either of those lists/data sets was HIV, which is not a hugely common condition but is extremely well-known, making it likely to have a large number of monthly searches. Conditions such as scabiesand hepatitis b may be transmitted in ways other than sexual intercourse, such as prolonged skin-to-skin contact, sharing items such as clothes/bedding/towels, or sharing tothbrushes/nail clippers/razors and coming. However they are still classed as STDs, and are still included on the NHS’s list of common STD’s/STI’s in the UK, therefore they have been included as part of this research.

When Do We Search For STDs Most Commonly?

To gain a more in depth understanding of how people in the UK are affected by STDs and the times of day they are most likely to play on peoples’ minds, we conducted an analysis of online searches for some of the most common STDs in the UK, using Google Trends to see when in the last seven days they were searched the most and if there was a recurring pattern.

Since chlamydia, genital warts, herpes, syphilis and gonorrhea are five of the most commonly diagnosed and known STDs in England*, as well as some of the most commonly searched STDs in the UK**, we decided to analyse the search terms with ‘symptoms’ included, with the idea that those searching for these terms would be less likely to be searching for research purposes and more likely to have identified a symptom of an STD on themself or someone else.

These results could mean several things—whether it’s that people are kept awake at night worrying about their sexual health, they decide to do some research after a few drinks, or whether symptoms are most commonly noticed for the first time while we’re in bed, what matters is that we have a frequent pattern of searching for sexual health information and/or advice, which is often a good thing!

We also looked up the search term ‘std screening’ on Google Trends over the last 7 days, to see if there were any similarities between this and the searches for the STD search terms.

Which UK Cities are Most Affected by STDs?

After finding out from Public Health England that chlamydia, gonorrhoea, herpes, and genital warts are the most commonly diagnosed STDs in England*, we decided to use Keyword Finding to find out which STDs are most commonly searched in the UK’s 25 most populous cities. This is what we found: 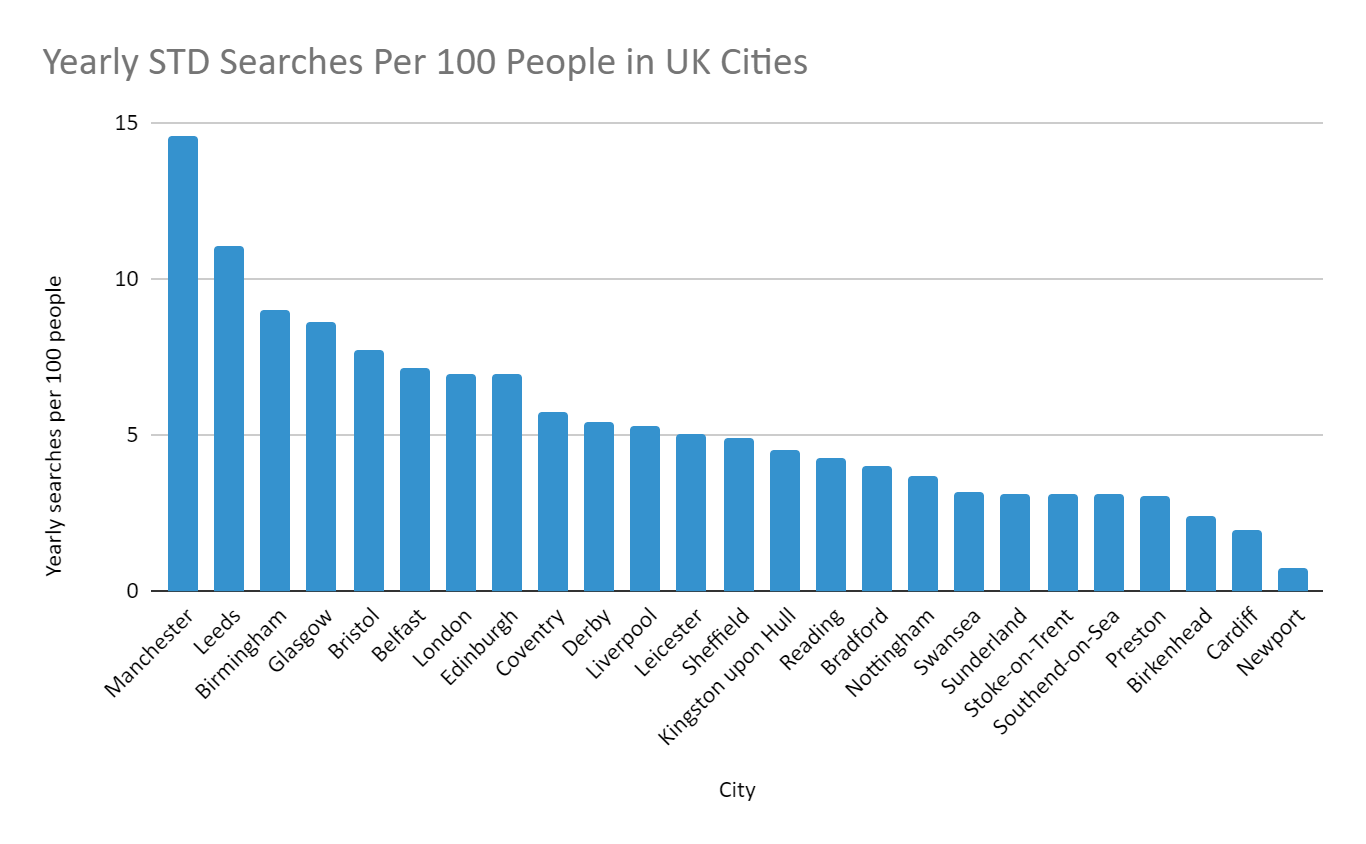 *Data from gov.uk shows figures of new STI diagnoses in England in 2019 and 2020, with chlamydia, gonorrhoea, genital warts and herpes having the highest number of new diagnoses in 2020 out of the figures collected by Public Health England.

Methodology: To obtain this data we looked at monthly searches in 25 of the most populous UK cities for different STD search terms such as ‘chlamydia symptoms’, ‘gonorrhea symptoms’ and ‘genital warts symptoms’. Then multiplied the monthly averages by 12 to find the average yearly searches, and divided these figures by city population numbers sourced from World Population Review in order to find the yearly average searches per person. We then multiplied these figures by 100 to find the yearly average searches per 100 people in each city.

What Are Our Most Common Symptoms?

We did some research on the most common STD symptoms*, and used Keyword Finder to look at how many monthly searches on average each symptom gets in the UK. This is what we found:

As we can see from the table:

*This is not an exhaustive list of STD symptoms, but it is a list of symptoms that have been observed to be frequent across different common STDs.
**While ‘unusual vaginal discharge’ is a common symptom of STDs, vaginal discharge is a common and normal occurrence that many, especially young women, may be unaware of, so it is difficult  to say what percentage of these searches would have been for abnormal discharge

How are Different Genders Affected by STDs?

Looking at data published by Public Health England, we can see that:

*’non-specific genital infections’ refer to when a urethral sample suggests inflammation or infection, but urine tests for chlamydia and gonorrhoea are negative. 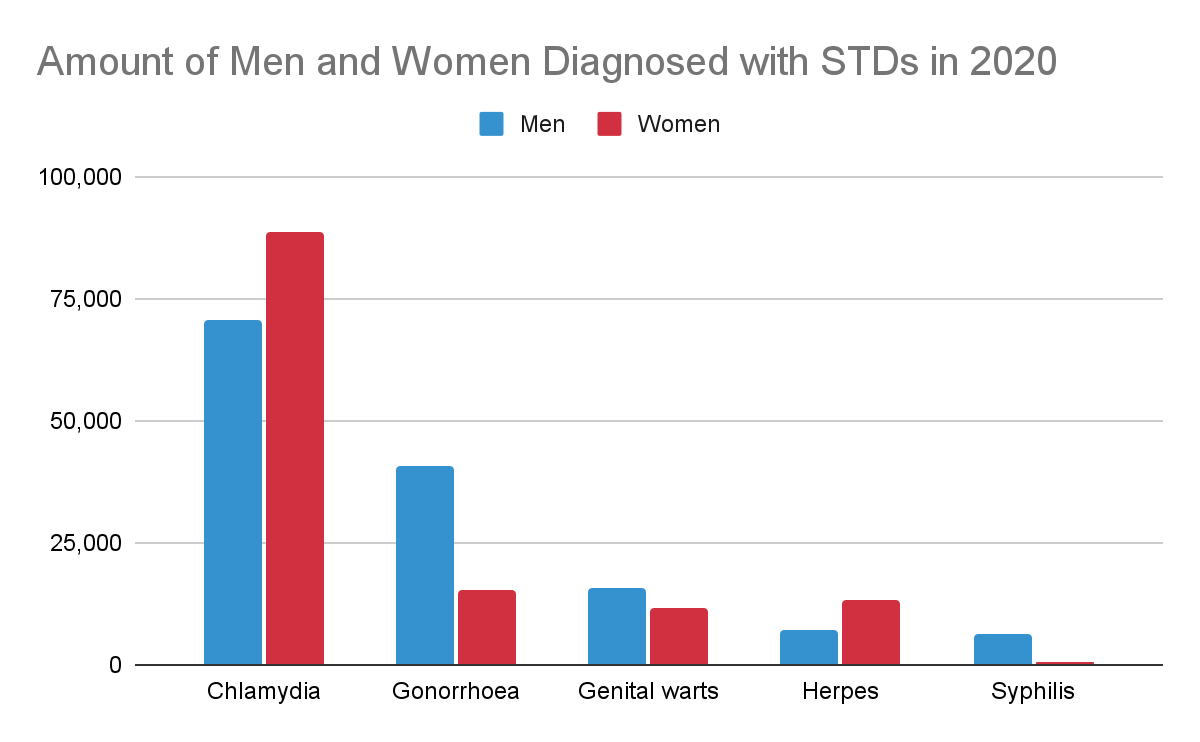 Did the COVID19 Pandemic Change How We Are Affected by STDs?

It comes as no surprise that a global pandemic would affect the numbers of STD diagnoses across the UK, given lockdowns, less sexual partners, and being unable to get tested or book medical appointments.

According to research recorded by Public Health England: 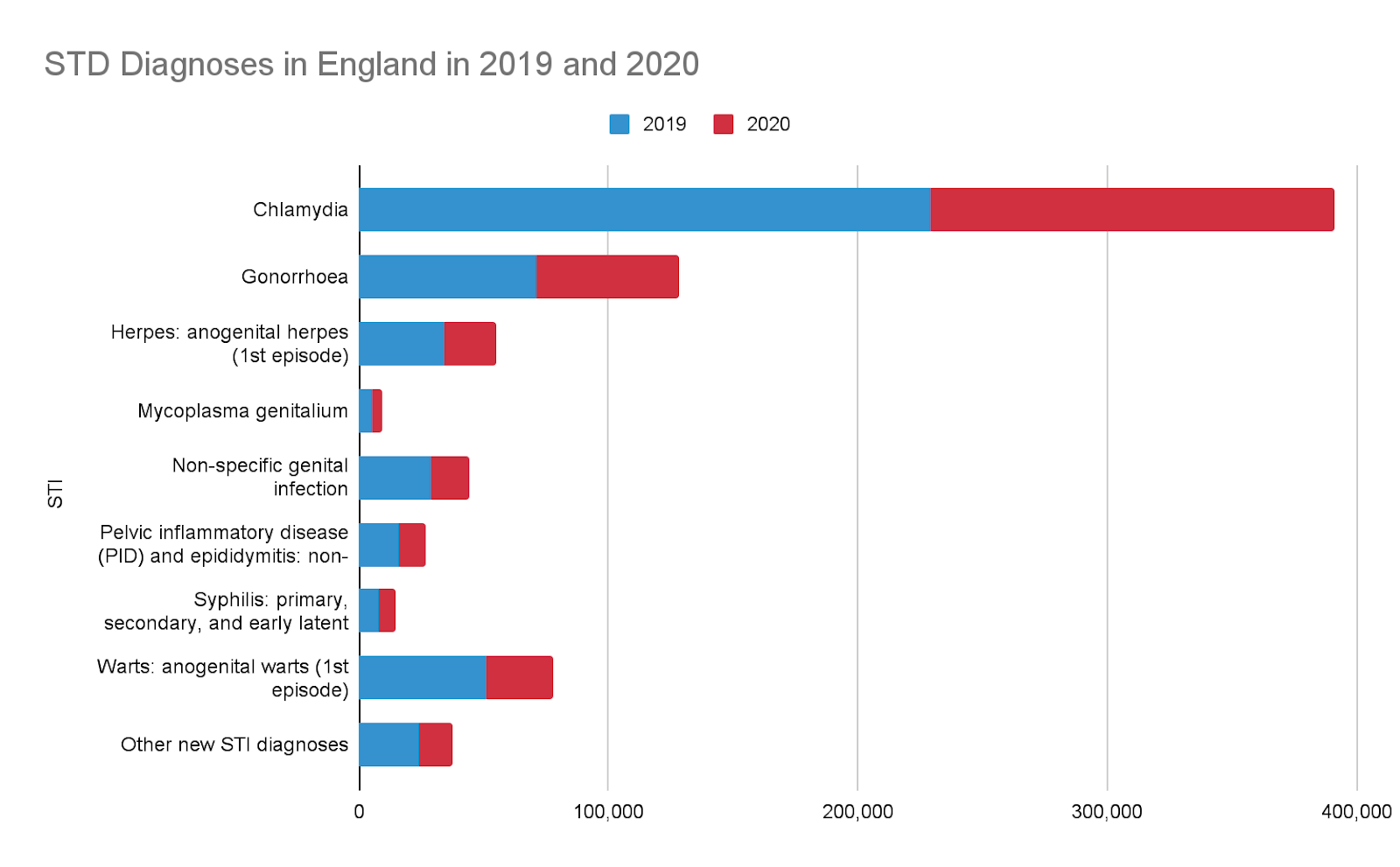 Looking at the data from Public Health England, we can see that:

*This is not counting the STDs that are unspecified by name, including the ones included in the category of ‘non-specific genital infection’ and ‘other new STI diagnoses’.